Where are the marketing results?!

Okay, probably not what your Valentine’s date cares about. But if you’re a marketer, you might be interested in merging the most lovey-dovey of days with your marketing. But how?

Well, these companies have figured out some creative ways to leverage the warm and fuzzies (or unadulterated rage and crushing loneliness … whatever) that Valentine’s Day instills in people.

If you don’t have a marketing campaign planned for the 14th, maybe some of these will inspire you to get in on some last-minute Valentine’s Day action.

In 2020, many online threads and message boards were discussing the controversial website “OnlyFans.” This platform invites users to purchase videos or images from people or influencers with profiles on the site.

The cheeky holiday campaign, which aims to earn donations for Muddy Paws Rescue, began with the brand launching a co-branded website called OnlyCans.dog.

When visiting the “OnlyCans” website, you instantly see videos and images of shirtless men holding cute puppies. You can also browse the profiles or each man-puppy duo.

From each profile page, you can then pick and share a pre-recorded video message or photo of them with a friend or loved one.

This is a great example of a co-marketing campaign that leverages edginess and current trends to create a campaign that catches your eye and makes you laugh. Although Crook and Marker are only subtly mentioned on the website, users know that they created it and that the campaign is for a good cause.

While this campaign isn’t specifically about marketing a brand, it’s fun and unique — which might enable shoppers to remember Crook & Marker next time they’re looking for a Spiked Seltzer product.

Nothing says Valentine’s Day like giving someone a bottle of — Ranch Dressing?

In 2021, while flower companies and B2C brands were highlighting the romantic gifts partners could give to each other, Hidden Valley took a funny approach to this strategy by offering audiences customized Valentine’s Day-themed bottles of Ranch salad dressing. 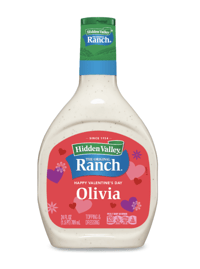 While this seems like an odd gift to some, Hidden Valley knows that they have fans out there that just love to cover everything they eat with Ranch dressing. To those audiences, this gift is funny, personalized, and potentially useful.

“I appreciate Ranch leaning into the quirky and self-aware following for their product. It’s a consumer brand not trying too hard,” says Connor Cirillo, HubSpot’s Conversational Marketing manager. “I can’t wait to order some for my Valentine. And this totally isn’t just me,” Cirillo, who brought the campaign to our attention, admits.

Many people have identified as a “third-wheel,” or the only single person hanging out with one or more couples. And, many of these people know how awkward or uncomfortable couple’s holidays, like Valentine’s Day, can be.

That’s why Deliveroo’s 2020 Valentine’s Day ad told the story of a third-wheel named Kevin, rather than a romantic couples’ narrative.

The commercial, which is filmed to look like a documentary, follows the life of Kevin — an incredibly single man who’s always surrounded by couples. As the ad goes on, it tackles the strange, awkward, and completely untrue thoughts that single people might wrongly think about themselves.

The narrator, who’s seen throughout the commercial, explains, “Being a single doesn’t just effect Kevin when he’s at home. Many life-affirming activities are impossible alone. — It can be tiring being this lonely. He’s just a hollow shell.”

As the narrator dramatically describes the slight inconveniences of being single in a comedic and light-hearted way, Kevin’s seen playing boring single-person sports and posing in a two-person photo stand. As Kevin is seen doing these daily-life activities alone, the narrator and his partner are also shown playing team sports together and enjoying each other’s company

After the narrator is done explaining how boring the single life is, he adds, “Deliveroo can help you give the third-wheel in your life some love.”

If you’re single person, the commercial is pretty hilarious because it reminds you of all the strange, over-dramatic comments less-single people make. Meanwhile, if you aren’t single, you reflect on the times you were single and thought about the same awkward thoughts.

Because audiences might relate or laugh at the sarcasm of this ad, it might be more memorable to them. Because of this, they might think of Deliveroo next time they’re ordering a Valentine’s Day meal for themselves or “third-wheeeling” friends.

Believe it or not, one of Twitter’s great Valentine’s Day campaigns was actually not launched online.

In 2020, Twitter launched billboard ads around Valentine’s Day that only showed users’ incredibly sarcastic tweets about love and dating.

For example, in the image below, one tweet reads “Yo, I’m really awkward. Good luck to whoever is about to date me,” while another reads, “My husband said we had too much cheese in the fridge, so now I need to find a new husband.” In this funny campaign, Twitter highlights the tweets of real users that have leveraged the platform to share their thoughts around Valentine’s Day. While other companies are zoned in on promoting ideal images of love and relationships, Twitter promotes relatable content from its actual users.

“The campaign not only feels authentic, but it reminds you that Twitter is a place to share your thoughts freely without judgement — even if they aren’t always pretty,” says Pam Bump, HubSpot Blog Audience Growth Manager.

In 2019, 1-800 Flowers launched a commercial where Cupid shared his grievances of how the bouquet company put him out of a job.

In the ad, which features a shirtless Cupid in his costume sitting in front of phones that are no longer ringing, Cupid yells “Ever since 1-800 Flowers, I’ve been out of a job!” He adds, “People no longer need Cupid to express their love. Now all they need is 1-800 Flowers.”

As Cupid continues to complain about 1-800 Flowers’ quality bouquet products, the video shows screenshots of the brand’s website and all the pretty flowers it has to offer.

Because you’re thrown into the scene of seeing Cupid as an angry, disgruntled grown man, the ad instantly grabs your attention. Then, as Cupid complains about how his competition is one-upping him, he also highlights how 1-800 Flowers is also better than competitors that also sell romantic products because they provide quick and painless scheduled delivery.

This ad is a great example of how a brand can playfully leverage their competition, and tell a fictional story, that highlights what makes their product different.

In 2019, the Italian restaurant chain Frankie & Benny’s referenced romantic scenes from notable films like “Lady and the Tramp.”

The carousel post then highlights actual photos from iconic movies like, “When Harry Met Sally.” In the post’s caption, it encourages Instagram audiences to guess which movies are being referenced.

While the real dog’s mimicking Lady and the Tramp grabbed attention, especially from the animal lovers on Instagram, this post’s caption and other photos encourages audiences to interact with the brand by guessing which movies are being referenced.

This is both a fun way to boost brand awareness, and leverage the holiday to gain engagement on social media.

In 2018, Panera tweeted that customers who got engaged in one of their restaurants on Valentine’s Day could win free wedding catering from the chain.

The tweet included a short and simple video which announced the promotion and showed two Panera employees cheering, as if they were witnessing a proposal.

Love is in the air. This Valentine’s Day, get engaged at a Panera and we might cater your wedding, for free. #PaneraProposalSweeps https://t.co/mpL5VbjSOd pic.twitter.com/VPRzu0QLNd

This is a quick and sweet way to leverage the holiday and social media to gain foot traffic into a physical business. Although Panera is a giant corporation, this campaign strategy is so simple that smaller businesses could create something similar with a tweet, short video, and offer that drives foot traffic.

Just before Valentine’s Day in 2018, Facebook Messenger’s Twitter announced that if you shared that you were “In a Relationship” with a friend you were messaging, celebratory hearts would rain down in your Messenger thread with that person.

Although a small business probably can’t add a major feature to their product just because of a holiday, this is a good example of how you can theme something related to your product, such as your website, around a holiday temporarily.

Another thing that’s interesting about this campaign is that Facebook is using a competing social platform, Twitter, to announce this new feature. This slightly undermines Twitter, which also allows direct messaging but with less interactive features.

While Burger King’s “Adults Meal” campaign is one of the oldest on this list, it’s still a classic that marketers talk about today.

Burger King has always been no stranger to poking fun at its biggest competitor, McDonalds. This was no different on Valentine’s Day 2017 when they offered an “Adult Meal” alternative with a similar box shape to McDonalds’ kids’ meal.

In the ad for the meal, Burger King explains that Kids’ Meals are for kids. But, on the night of Valentine’s Day, Burger King customers can buy an adult meal with an “adult toy.”

This campaign is pretty cheeky. However, it’s edgy mission and subtle comments about its competitor’s product make it memorable and funny.

Technically, this campaign wasn’t created for Valentine’s Day specifically. But, many of our marketers thought it had all the perfect elements of a great Valentine’s Day campaign. Because of this, we wouldn’t be surprised if it sees a lot of circulation in February.

In the commercial, directed by actor Ryan Reynolds, Satan sits in Hell using Match’s app when he sees he’s matched with a woman named 2020. When he meets up with her on Earth, he nervously says “Hi 2-0-2-0.” She replies, “Please, call me 2020” — pronouncing it like the year.

As the commercial continues, 2020’s character appears to be the epitome of everything that happened in 2020.

For example, which launched in December, shows Satan and 2020 causing mischief, stealing toilet paper from store shelves, having a picnic inn empty stadiums, and ultimately posing for a selfie in front of a dumpster fire.

The couple frolics to the familiar sounds of Taylor Swift’s hit song, “Love Story.” which also sparks a sense of rom-com nostalgia for millennials.

On the same day of this ad’s release, Match and Reynolds also shared another commercial showing the pair explaining how they met in couple’s counseling.

In this video, Satan explains how he found 2020 on Match:

“I started by using the Match custom search filter. I filtered out joy, happiness, toilet paper, and reason,” Satan says in the video below:

Although this didn’t launch in February, it was a very clever newsjacking example that many of our marketers say they enjoyed when they were asked to share their favorite Valentine’s campaigns.

While 2020 was a difficult year for many, Match and Reynolds identified a tasteful way to create content that audiences could relate to. At the same time, they still told an epic, hilarious love story with a pleasant, entertaining tone. Although they discussed a truly terrible year, they did so in a way that felt like escapism for the viewer.

As you create and launch Valentine’s Day campaigns, take note of these strategies many of the brands above used:

Editor’s Note: This blog post was originally published in Feb. 2013, but was updated for comprehensiveness on January 30, 2020.