Since marketers are at the mercy of algorithms on nearly every publishing channel, knowing how each of these unique algorithms work is crucial to attracting and maintaining an audience.

Luckily, while some channels are rather reserved about the secrets of their algorithms, YouTube, which boasts over 2 billion users, has been remarkably transparent. It launched a course for creators about getting discovered, walking them through the nitty-gritty details of increasing their visibility on the platform.

Naturally, we took the course to help you understand exactly how to boost your rankings on the video platform. Read on to learn what we discovered and how you can grow your audience on YouTube.

YouTube’s algorithm serves the most relevant, personalized videos to their users on five different sections of their platform: Search, Home, Suggested Videos, Trending, Subscriptions, and Notifications.

By helping users find the videos they’re most likely to watch and enjoy, YouTube can keep viewers on the platform for as long as possible and get them to visit their site regularly.

To figure out which videos and channels users are most likely to enjoy watching, YouTube “follows” their audience, which means they track their users’ engagement with each video they watch. More specifically, they pay attention to which videos each user watches and doesn’t watch, how much time they spend watching each video, which videos they like and dislike, and which videos they’re not interested in based on the user’s feedback.

Since their algorithm rewards engagement instead of vanity metrics like views and clicks, YouTube incentivizes creators to produce videos that their audience actually enjoys watching, discouraging them from trying to game the system.

But YouTube’s algorithm also uses different signals and metrics to rank and recommend videos on each section of their platform. With this in mind, let’s go over how the algorithm serves content via YouTube’s six main user categories: Search, Home, Suggested Videos, Trending, Subscriptions, and Notifications.

The two biggest factors that affect your videos’ search rankings are keyword relevance and engagement metrics. When ranking videos in search, YouTube will consider how well your titles, descriptions, and content match each user’s queries. They’ll also consider how many videos users have watched from your channel and the last time they watched other videos surrounding the same topic as your video. 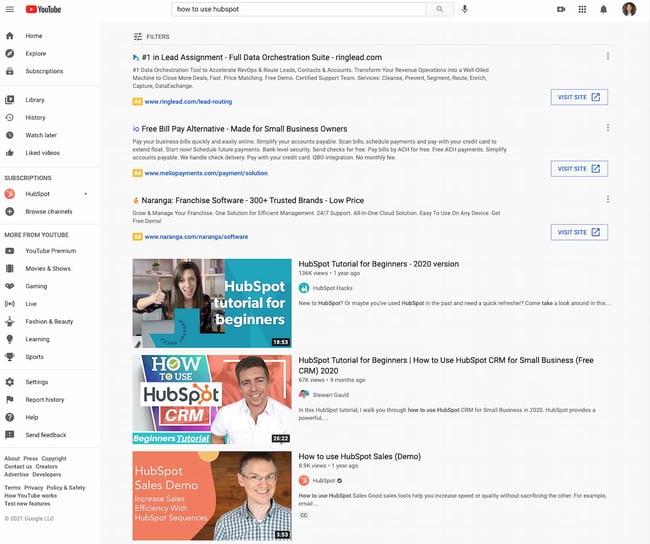 Although the user’s history is important, YouTube also looks at “which videos have driven the most engagement for a query.” The Search section also offers sponsored ads related to the query.

When users access the home page, they first see videos from their subscriptions, then suggested videos based on their previous watch history and the videos’ performance. While you may be tempted to try to snag a coveted spot on the page, YouTube encourages creators to simply create good content that people want to watch and click on. 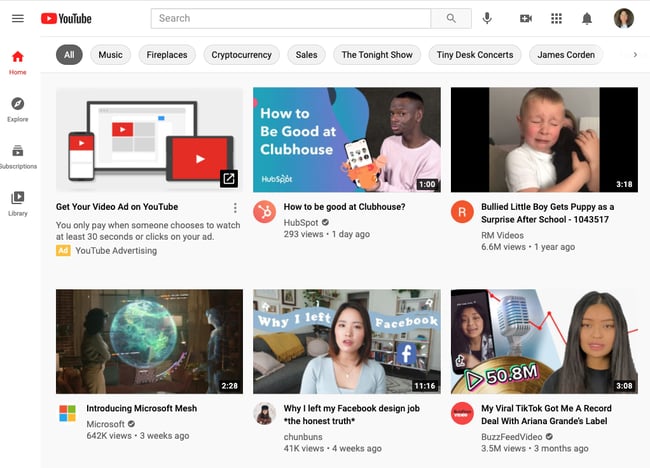 No two users will have the same experience on YouTube — they want to serve the most relevant, personalized recommendations to each of their viewers. To do this, they analyze users’ activity history and find hundreds of videos that could be relevant to them.

Then, they rank these videos based on 1) how well each video has engaged and satisfied similar users, 2) how often each viewer watches videos from each channel or other videos surrounding the same topic, and 3) how many times YouTube has already shown each video to users.

YouTube has also noticed users tend to watch more content when they receive recommendations from a variety of channels, so they like to diversify their suggested videos feed.

The trending page is a feed of new and popular videos in a user’s specific country. You’ll find it by heading to Explore on the sidebar, then clicking on Trending.

YouTube wants to balance popularity with novelty when they rank videos in this section, so they heavily consider view count and rate of view growth for each video they rank. They also split trending videos into four categories: “Now,” “Music,” “Gaming,” and “Movies.” 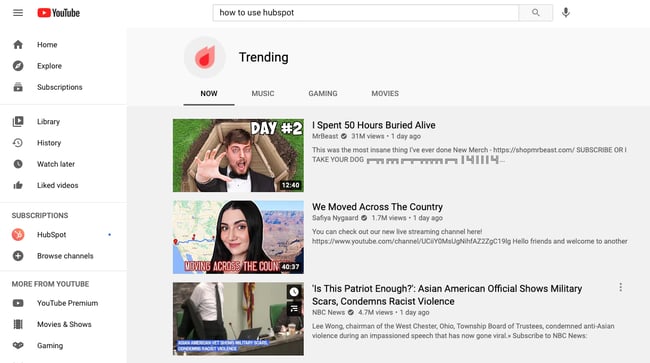 YouTube has a subscriptions page where users can view all the recently uploaded videos from the channels they subscribe to. But this page isn’t the only benefit channels get when they acquire a ton of subscribers. 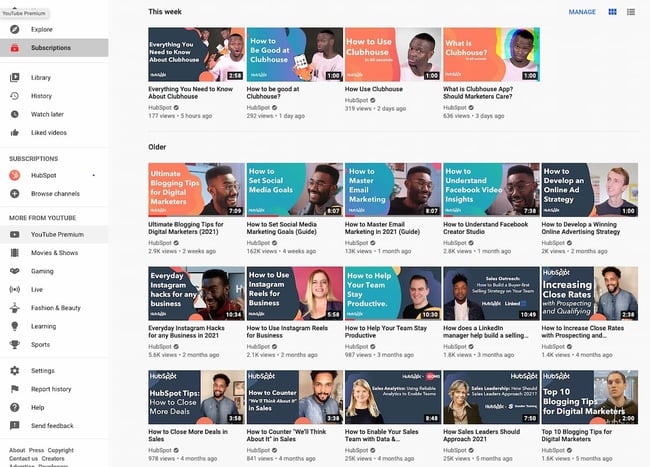 The only way to optimize for showing up in users’ notifications is to ask your subscribers to tap the bell button next to the subscribe button.

But how can you ask anyone to do that if you don’t yet have enough viewers and subscribers? By optimizing your videos for YouTube’s algorithm, you can grow your audience. Remember: it all comes down to creating good content that people want to watch.

How to Optimize Your Videos for YouTube’s Algorithm

YouTube ranks videos based on two qualities: keyword relevance and engagement metrics (which are used to measure a video’s performance).

Let’s take a look at both of these in more detail.

To rank on YouTube, the first thing to consider is optimizing your videos and channel for popular search queries. To do this, place relevant keywords in your videos’ titles, tags, descriptions, SRT files (which are transcriptions), video files, and thumbnail files.

You should also check out the most popular queries guiding viewers to your videos, which you can find in YouTube’s Search Report. If these queries are slightly different from your video’s topic, consider updating your video to fill these content gaps and add the keywords to your metadata. If there’s a stark difference, consider making new videos about these popular queries.

The next thing to consider when ranking on YouTube is optimizing your videos and channel for engagement. The key metric to consider here is watch time, or the aggregate amount of time users spend watching your videos.

To get people to watch in the first place, you need to attract users’ attention. And one of the best ways to instantly grab users’ attention is by creating vibrant thumbnails for each of your videos.

Thumbnails — the small, clickable snapshots that viewers see when they search for videos on YouTube — are just as important as a video’s title. They provide a preview of your video and entice viewers to click through. This can help you differentiate yourself on a platform clogged with standard thumbnails all screaming for attention.

To create a striking thumbnail, consider including a talking head because people are naturally drawn to human faces. Additionally, consider contrasting the colors of your thumbnail’s foreground and background to really make it pop.

Once you’ve attracted users’ attention, you can engage them by creating a bingeable series or show. You can also create playlists about a certain topic that start off with the videos that have the highest audience retention rate. This will increase the odds that users will watch most of the videos in your playlists, boosting your channel and videos’ watch time.

Another way to refine your overall video strategy is by measuring your videos’ performance against other engagement metrics, like average watch percentage, average view duration, audience retention, and average session duration. If you can figure out which topics and videos generate the most engagement, and you solely focus on creating those types of content, you’ll be able to shoot up in YouTube’s search results page and suggested videos feed.

Now that we’ve covered how the YouTube algorithm works and how you can optimize your videos for it, let’s take a look at how the algorithm has changed over the years.

Before there was ever a “formal” YouTube algorithm, YouTube ranked videos by view count. If a video had been watched hundreds of thousands of times, it’d be suggested to everyone, regardless of their interest in the topic or genre of the video.

This was an easy system to cheat. Constantly refreshing the page was one method creators used to up the view count. Others used clickbait titles to get more clicks.

While watch time is still highly relevant to YouTube’s algorithm, it’s not the central piece. But it was from 2012 to 2015.

YouTube wants users to stay on the platform. As such, videos with long watch times were favored over others and placed on the home page. It signaled to YouTube that the video was worth watching and that it was providing a positive experience to users.

Creators tried to optimize for this change by creating extra long videos — or really short videos that users would watch from beginning to end. In response, YouTube began to focus on overall viewer satisfaction, including “measuring likes, dislikes, surveys, and time well spent” on each video.

Since there are millions of videos on the platform, YouTube found it challenging to recommend the most relevant and watch-worthy videos to individual users. Using a practice called “deep learning,” YouTube started to take a close look at the user’s history to generate candidates and rank those videos based on the user’s activity.

The “video corpus” goes through two funnels: a “candidate generation” and “ranking” funnel. First, YouTube examines the user’s history to create a pool of candidates, which are then sent through the “ranking” funnel. 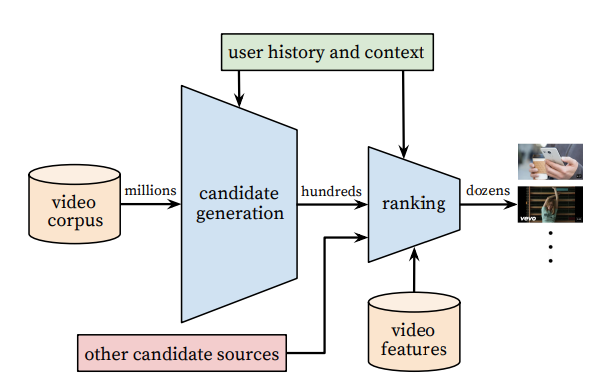 Once the videos reach the ranking funnel, they’re assigned a score and presented to the user from highest to lowest score. This is still a prominent part of the algorithm and likely the way we still get recommendations.

“We Remove content that violates our policies, Reduce the spread of harmful misinformation and borderline material, Raise up authoritative sources for news and information, and Reward trusted Creators.”

While the four Rs have been in place since 2015, they were only used to deprioritize junk comments and launch a dedicated platform for the news industry. The four Rs became a more prominent part of the algorithm in 2017 when the platform redirected users seeking extremist propaganda, then in 2019 when the platform started to systematically remove content that “borderline” violates its Community Guidelines.

YouTube launched over 30 changes to diminish the promotion of videos spreading false and harmful misinformation. It also uses external evaluators to gauge whether a video qualifies as “borderline content” by using Google’s public guidelines.

YouTube has yet to announce any new changes to its algorithm, but we can assume that it continues using deep learning to personalize the user experience and continues upholding the four Rs to control the spread of misinformation.

Keep Track of the YouTube Algorithm to Succeed on the Platform

As the YouTube algorithm evolves, it’s important to keep track of its changes so that you know what does and doesn’t get promoted on the platform. If you’re a business or individual creator trying to grow an audience on YouTube, be sure to optimize your videos for the algorithm so that your channel wins a loyal list of subscribers.

Editor’s note: This post was originally published in December 2018 and has been updated for comprehensiveness.